*for the exhibition opening, Walter will perform free airbrushing on clothing items brought to the reception by visitors 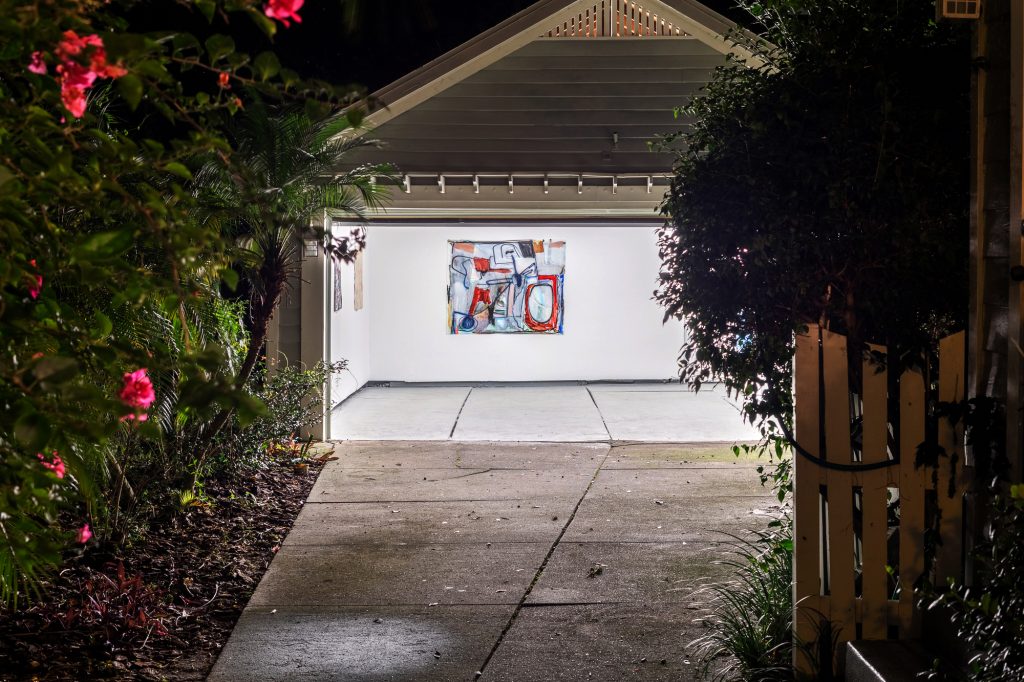 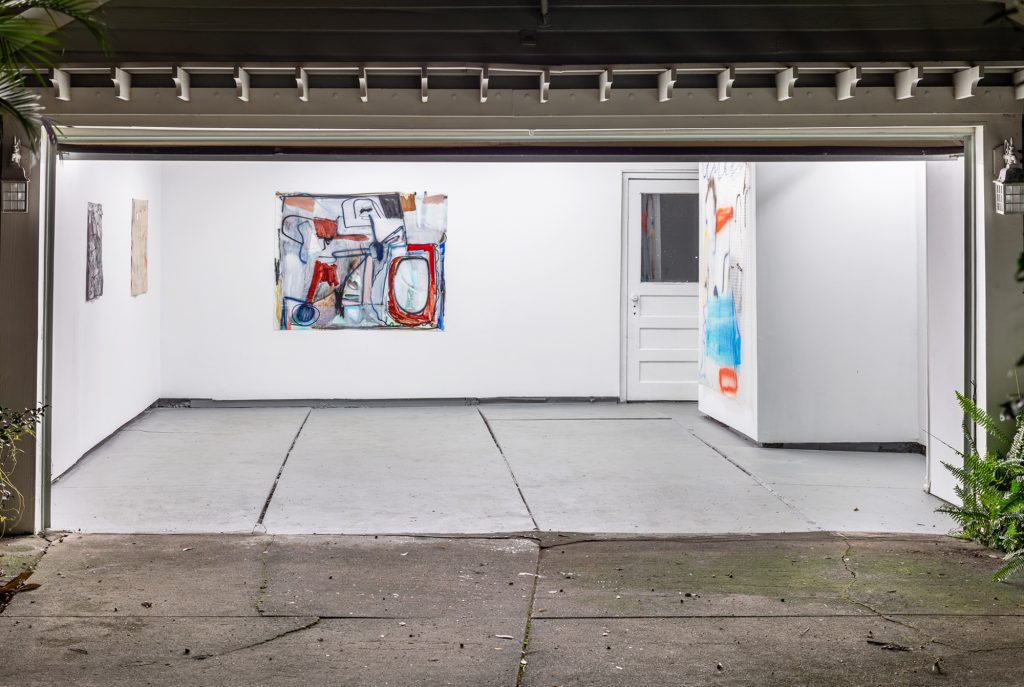 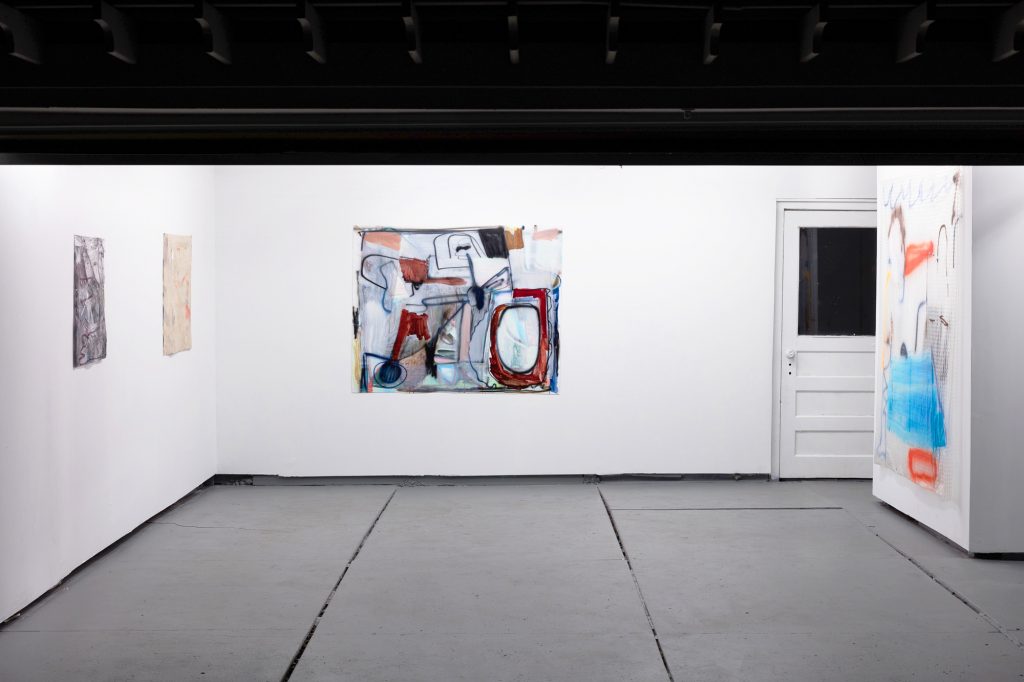 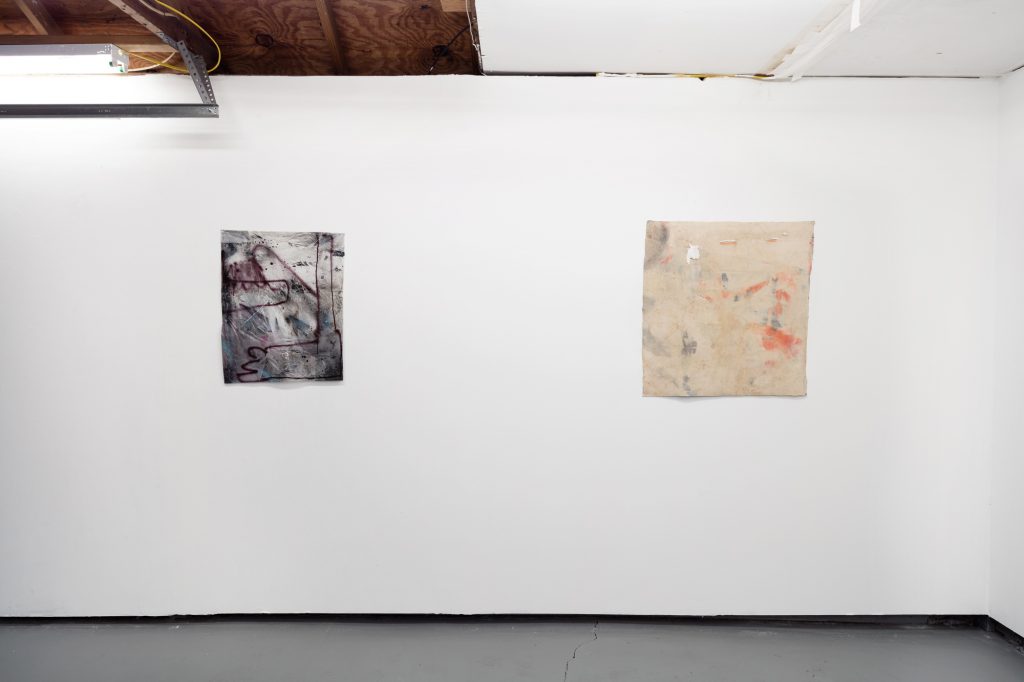 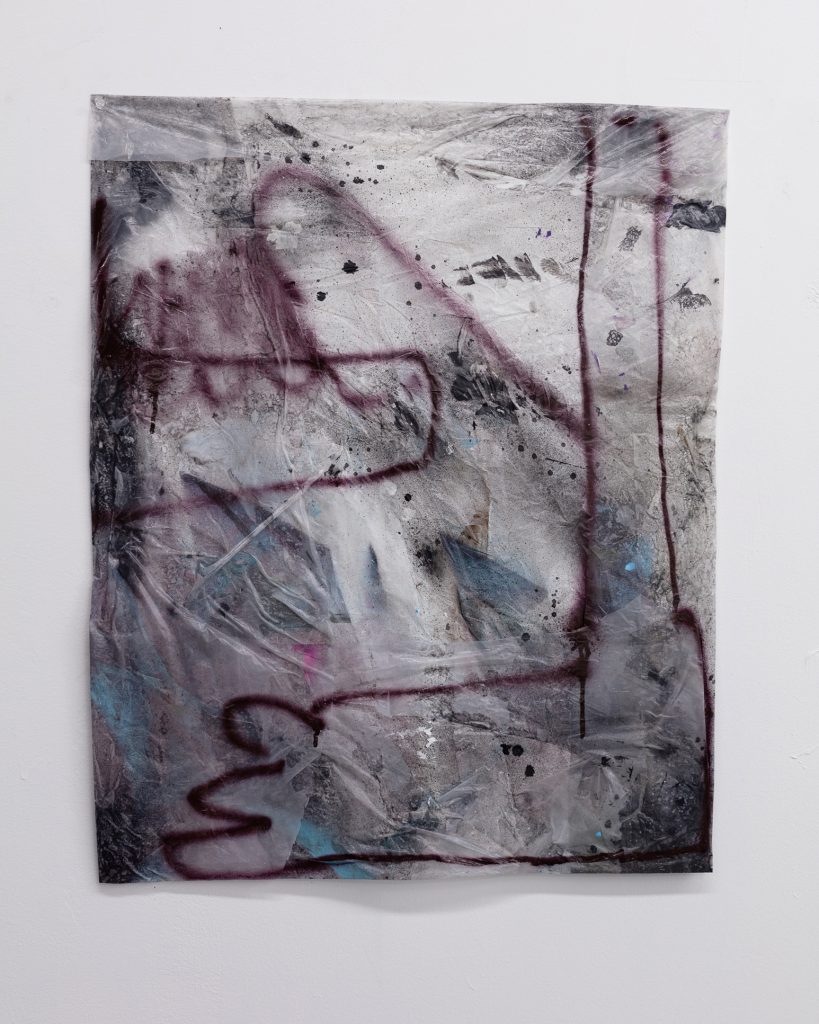 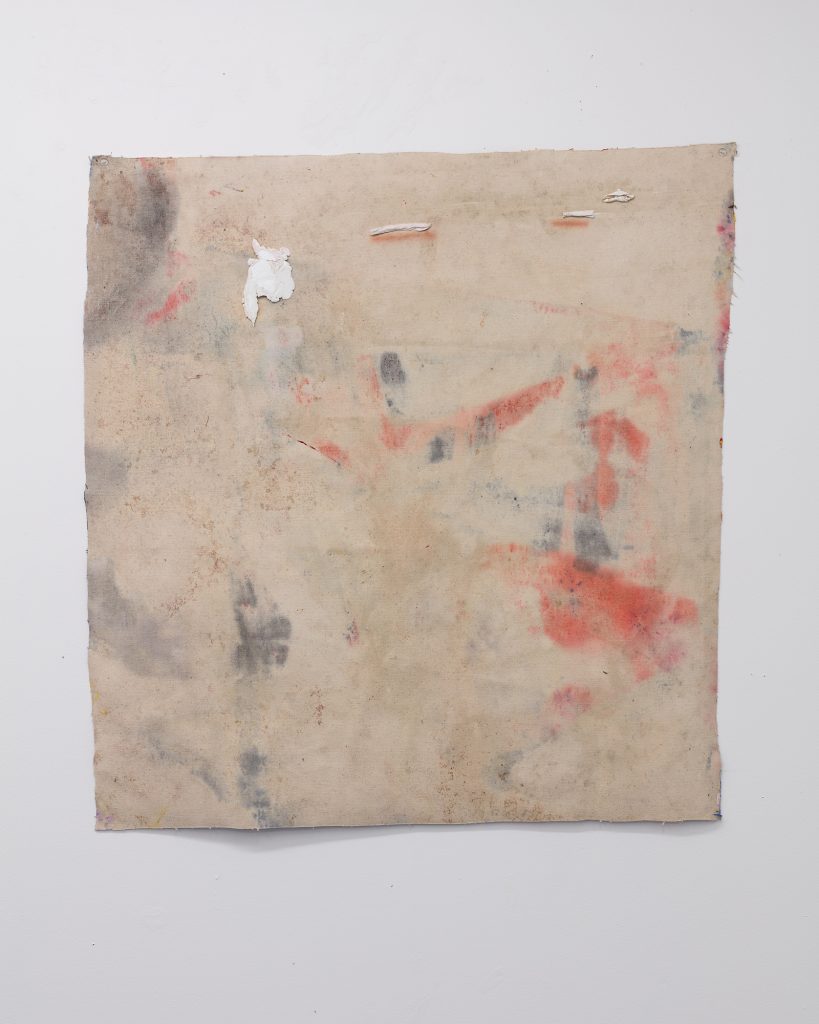 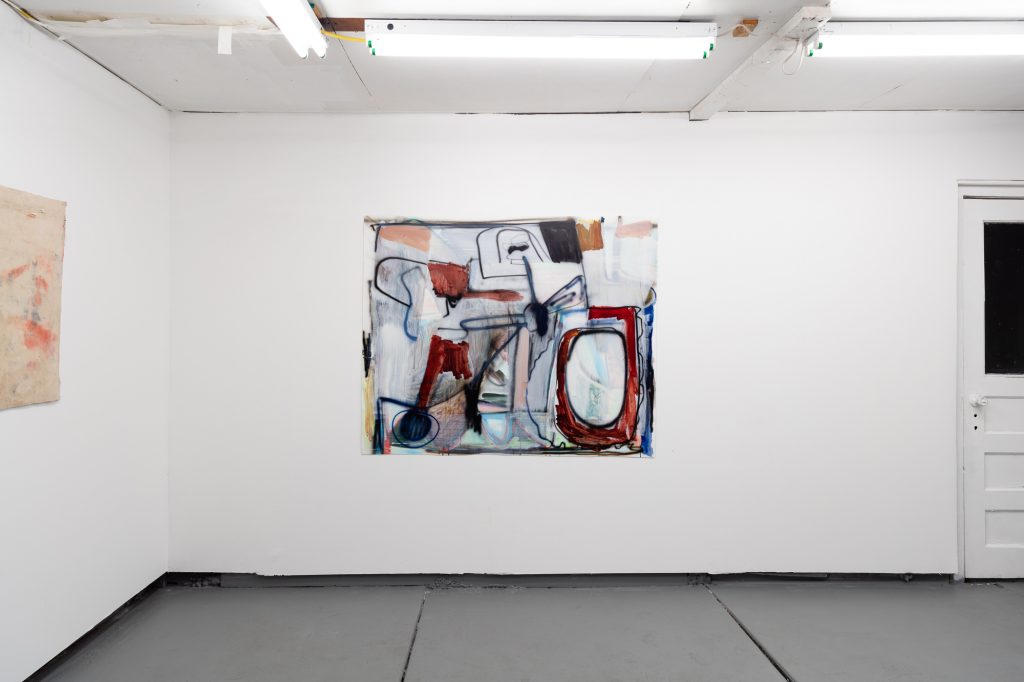 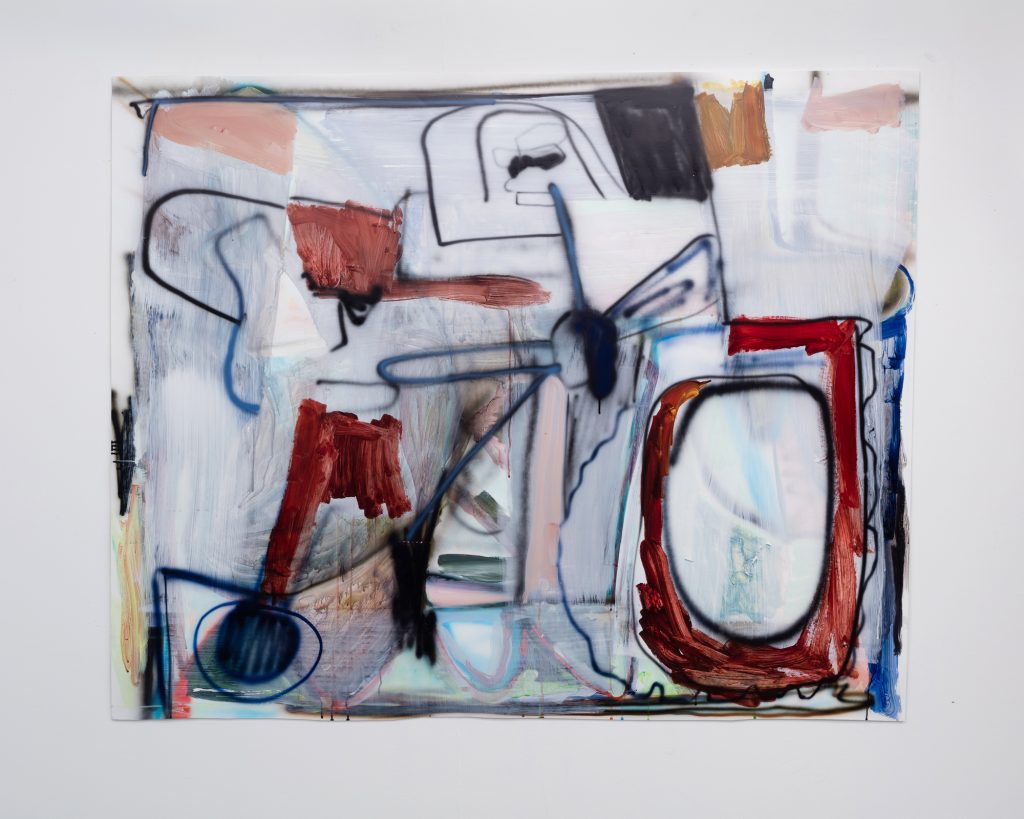 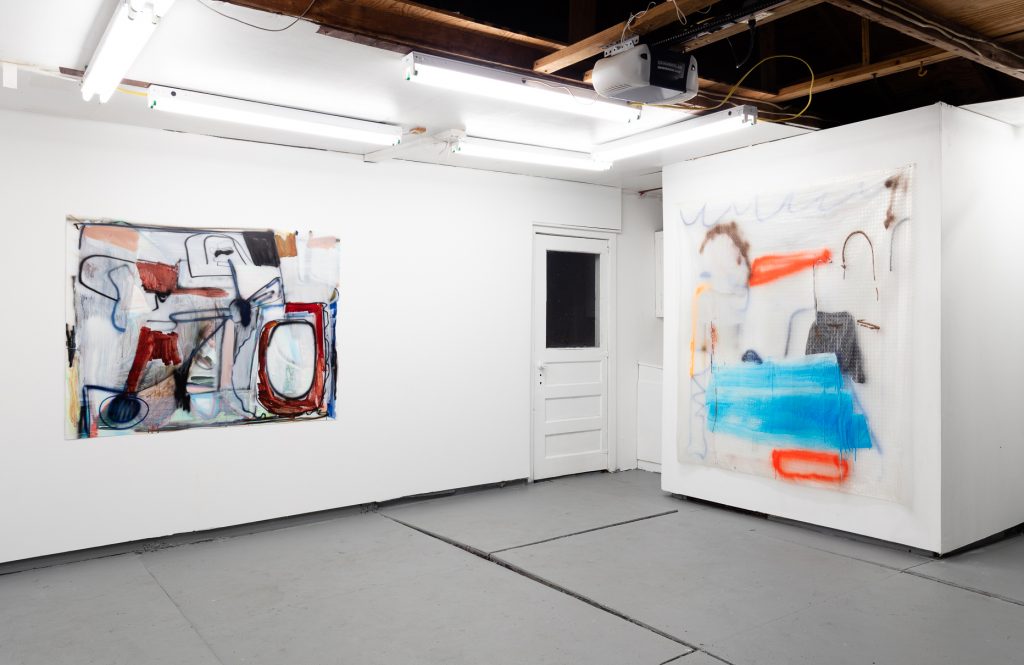 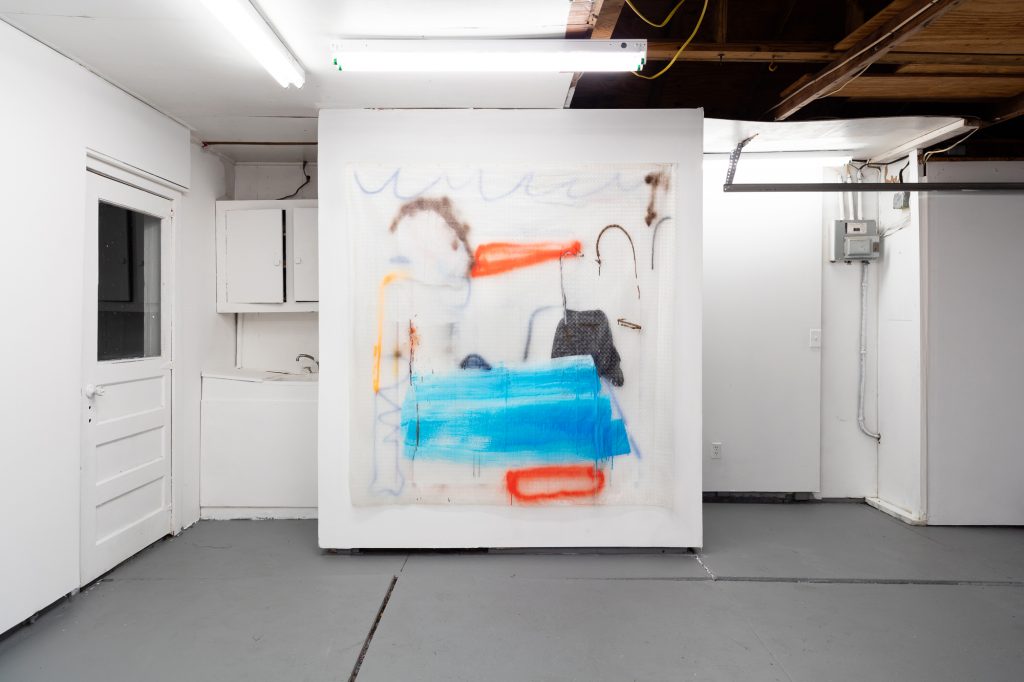 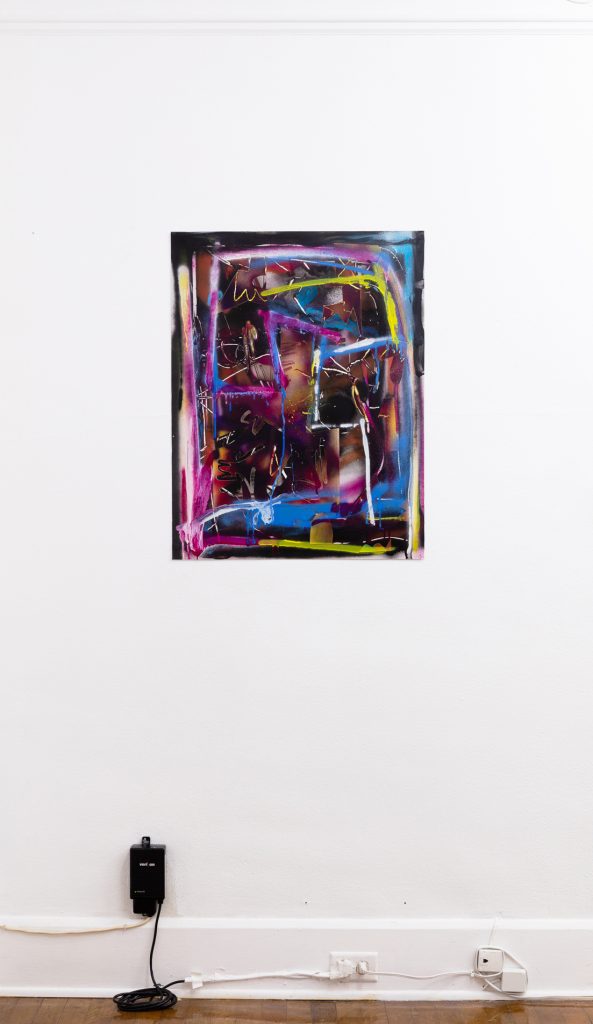 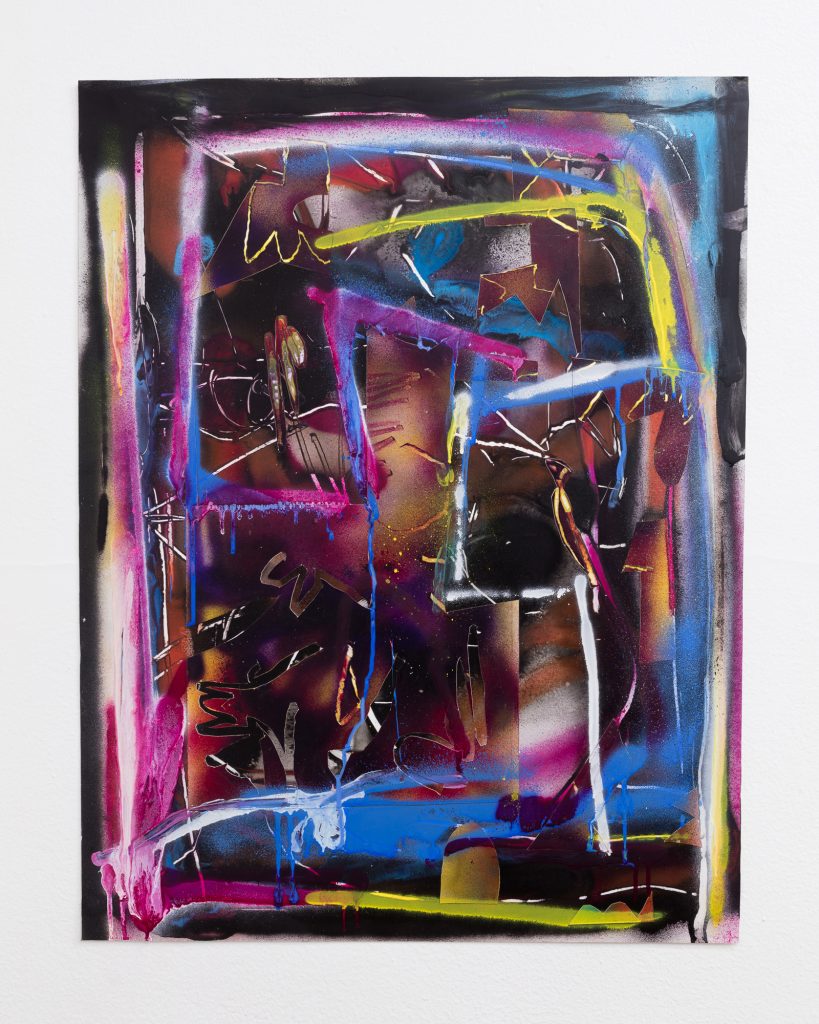 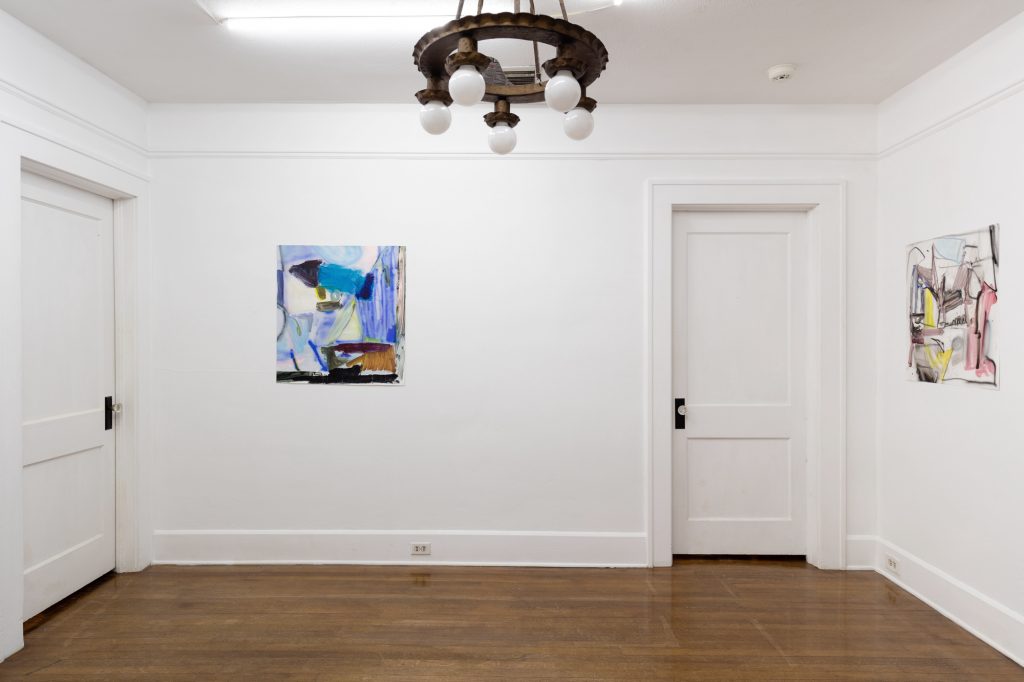 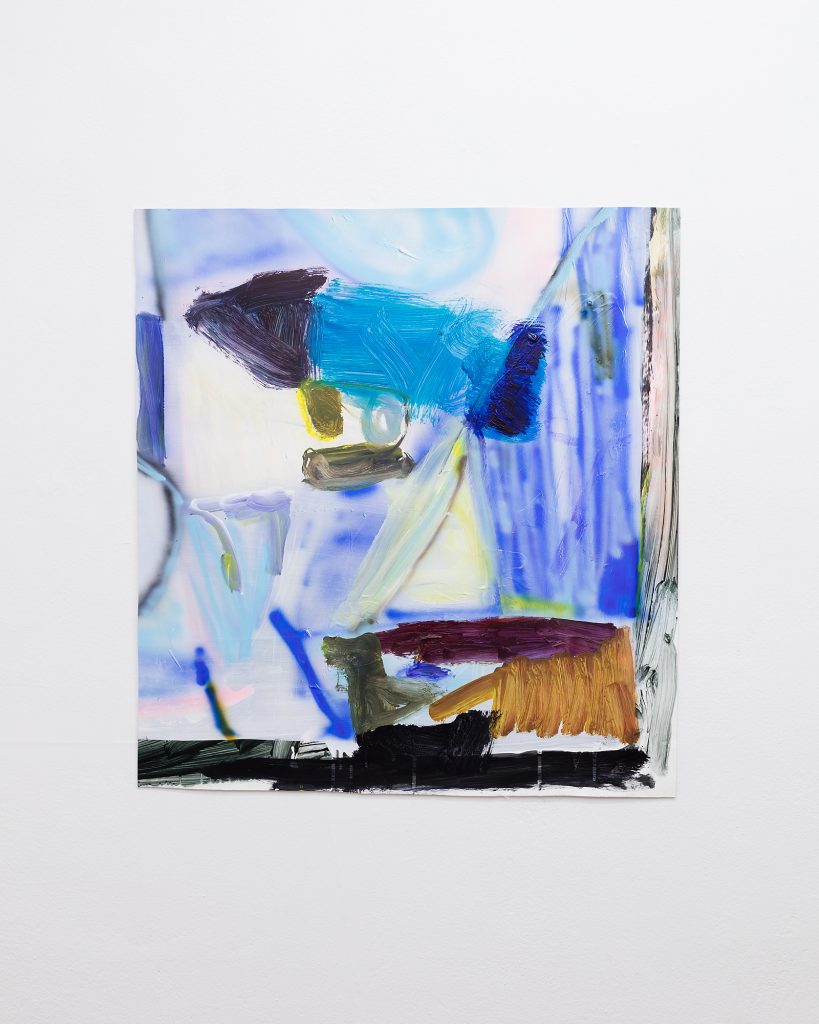 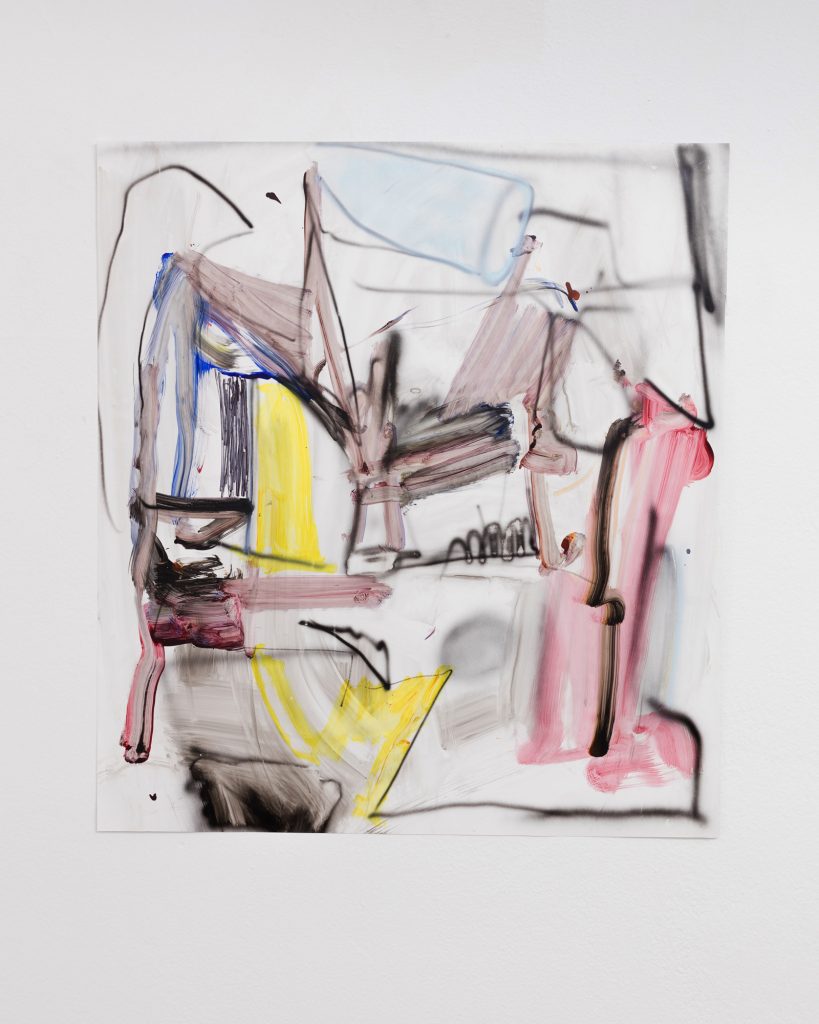 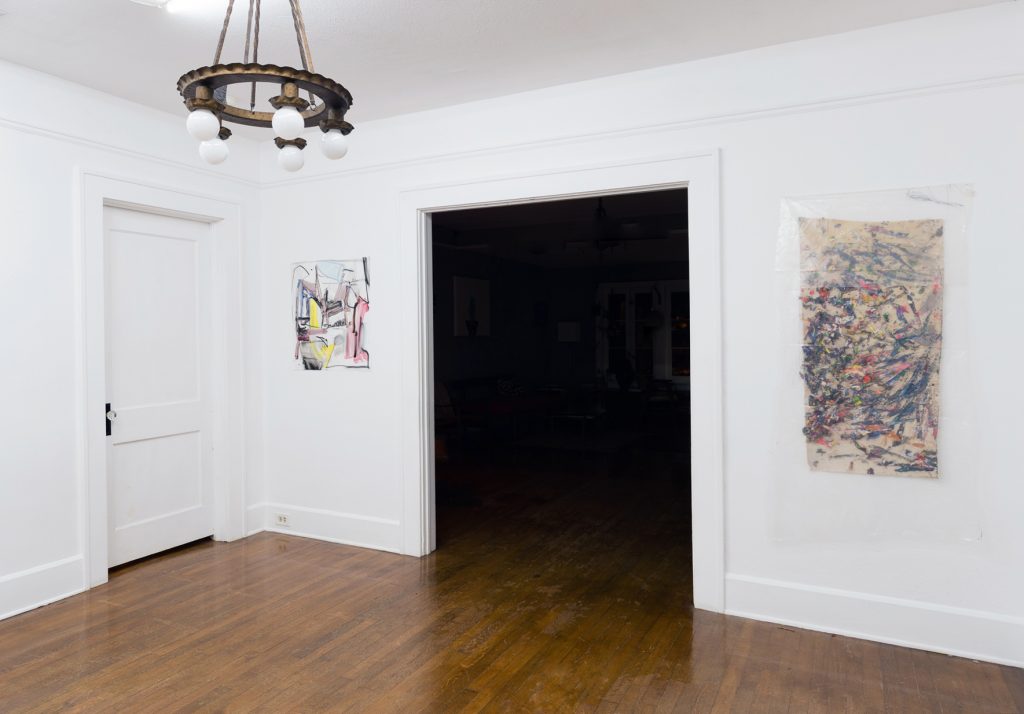 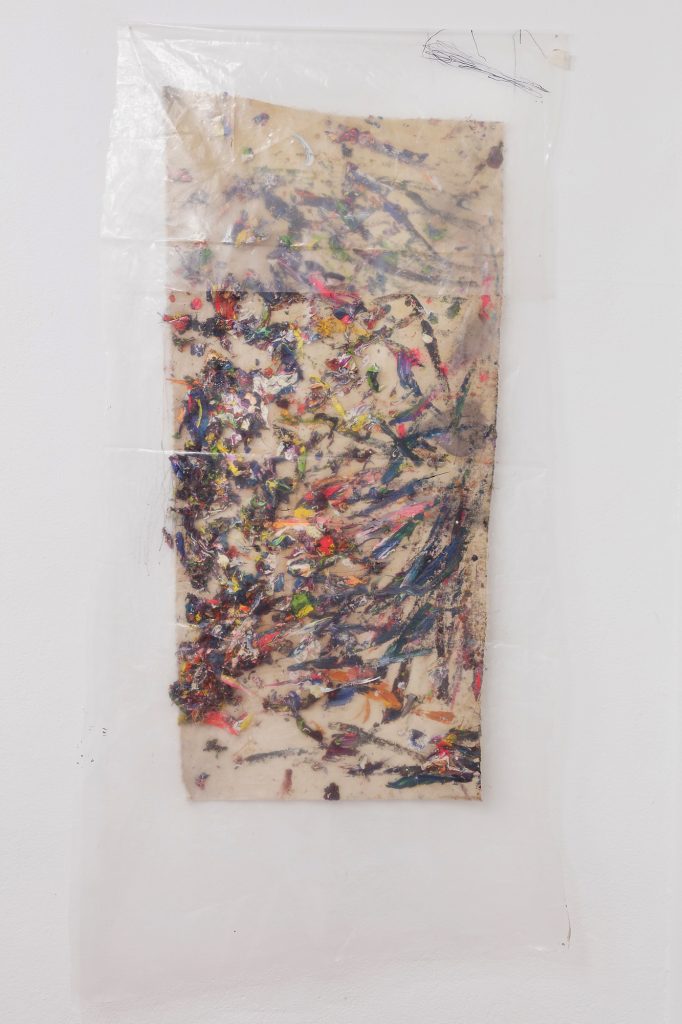 Excerpts from a conversation: Walter Matthews and Jason Lazarus

Jason:  Walter, you are Coco Hunday’s first Artist-in-Residence, which means you have been able to use the gallery space as a studio for the summer preceding your fall exhibition.  It’s been an education for me spending many hours with you while you work in the space…what’s it been like for you to have your studio practice embedded for four months at the gallery?  What’s different about this experience? How has it affected process?

Walter:  The most challenging aspect I have found about working in the gallery is that the isolation of the “studio space” began to dissipate as I became more aware that the space I am working in will be the same space the paintings will be shown.  For me, this realization opened up questions I have never really asked myself…How are these paintings informing each other? Do they need to? Do I want to make a body of work that represents a high level of certainty distilled into a type of thematic progression or would it be better to record, through presentation, a history of my time spent working in this space?  It turned into a kind of curating while making, meaning the more time I spent there working, the less I was able to suspend judgment. This kind of situational awareness reminded me of my time airbrushing in flea markets…the viewer is always over your shoulder and all of a sudden there was much more at stake.

Jason: Lets take this as our first tangent–it’s a great excuse to talk about what you learned airbrushing in Tampa’s flea markets?

Walter:  I would frequent the flea markets during my high school days.  My experience with the flea market was really based on its capacity for change, there was something that was formative about that space at the time–the architecture, the smells, the merchandise and diversity of culture. It became an institution of learning for me–this structure was living, an assemblage of things that was always in a state of becoming.  My hands learned certain things, I was between language and aesthetics, with an invested audience, and you’re executing for the customer right in front of you rather than searching.  It’s the performative act of making that has carried forward, but in my current practice, I’m performing for myself.  I’m searching.

Jason:  Where does the title of the show come from?

Walter:  “Colorless green ideas sleep furiously” is a sentence developed by Noam Chomsky to demonstrate how syntax and semantics are independent of each other.  In terms of syntax, this sentence is grammatically correct, while on a semantic level its content is absurd.  It doesn’t mean anything yet it sounds like it does. What attracts me to the text is that it is an example of an assemblage.  Assemblages are different from collections in that they produce emergent properties.  For instance, in the case of colorless green ideas sleep furiously, the order of these words form an assemblage that produces emergent meanings.  If you were to change the order of these words to say furiously colorless sleep ideas green, the emergent property is lost because the sentence is no longer an assemblage but instead a mere collection of words.  A more material example of an assemblage is that of tin and copper.  When these two metals are melted down and combined they form bronze which is an entirely new metal since it is both heavier and stronger.  It is a new property that emerges through the combination of both tin and copper to produce something that is more than the sum of these two parts.

Walter:  I’m not a linguistic expert so I’m not sure if I could give you an honest answer on how pidginization relates to the drift of syntax and semantics.  What interests me about pidginization and the coming together of different languages is that the process in which they are formed is through assemblage.  For example, Creole languages like Haitian-French are not broken forms of French, they are entirely new languages born out of slave plantations through a double process of pidginization and creolization.  Pidginization is the process of simplifying a language.  When people who speak different languages come into contact or in the case above are forced into contact with one another, a simplification of the dominant language occurs and an exploration of linguistic common denominators between the two are explored.

Creolization occurs when the pidgin language is enriched over time and develops into a fully fledged language. The interactions between these different languages form an assemblage that then gives birth to variants.  It is the same case for spoken Latin after the fall of the Roman empire, interactions between different provinces begin to form new versions of Latin and over time these variations became new languages.

I find this really exciting–how languages evolve.  Especially in relation to painting, how can my own visual language evolve?  For a while now, I have adopted the model of the assemblage and the process of pidginization and resulting creole as a strategy to develop visual vocabularies within my own practice.

I want my studio to be an assemblage–the space, myself, materials, and the paintings.  The question for myself is how can these elements interact in such a way to allow for emergence to occur.  In my paintings, I pidginize, then form a creole, then introduce another visual language that can develop into another pidgin, and so on.  I use these ideas as a strategy to avoid sterility in my paintings.  If me and my work aren’t establishing dialogues that form new variations, then discovery is lost and I am left with labor.  Devising ways to create the conditions for discovery is always my main concern, everything else follows.  Right now I’m looking to sociolinguistics.  A year from now I may be researching some specific branch of geology.  Whatever it takes for me to stay in that state of discovery is all that really matters.

Jason:  You’ve started to employ plastic in your work–yupo surfaces in lieu of canvas, readymade plastic objects as ground at times, and others times using plastic as mark–what brought about this shift?  What’s happening to you while working with these new tactics?

Walter:  It goes back to maintaining the conditions for discovery.  For me, canvas became a kind of psychological barrier.  I felt stuck and slowly became disinterested.  It became a sterile substrate to work on, meaning it began to feel like labor, it wasn’t offering me anyway to move forward.  That was a clear signal to me that it was time to introduce another material.  I wanted to introduce another language–plastic–and see how the material would affect mark and image making.

I wanted to look for an alternative material to canvas in order to de-train my hand and confuse my muscle memory, to form a new relationship that has less historical baggage in the literal act of mark making.  Beyond the new surface, I also started to fold and layer plastic as a way to intervene upon the linear progress of painting.  When you fold or layer different moments of linear progression you complicate its becoming.

Jason:  Would you say that there is a creolization happening in your work with the new tactics in plastic?

Walter:  Yes. I have made a handful of pidgins that I can now focus on individually and further refine until I feel like they have reached the point of exhaustion, meaning the paintings can fully articulate themselves.

I don’t pin up stuff in my studio, I don’t bring images into my studio–I’m a kind of plein air painter.  I want to create an assemblage out of the various works and the images start with materials and space, not with source images.  This is one of the strategies I employ to tease out the emergent.  How to best create the conditions for new languages to emerge–this is an ongoing question…

Jason:  Can you talk to me about your work Wea?

Walter:  Well my mother’s side of the family is Spanish and Cuban. Wea was the name I used for my grandmother since I could not pronounce the word Abuela as a toddler.  Abuela translates to grandmother, it took the form of Wea for me which somehow evolved into the phonetic version of how I would pronounce it.  It went the same for my grandfather Weo (Abuelo).  I am the eldest out of her five grandchildren so the word began to stick.  A sort of pidginization turned creole.  They are long passed, but until this day all of my cousins and even my mother, aunt and uncle refer to them as Weo and Wea. It was years before I came to realize the origin of these words that for some in my family became stand-ins for mom, dad, and in the case for my cousins and I, became a word that translated into grandmother and grandfather.

Jason:  After our many conversations we hit upon the idea of you airbrushing clothing at the opening reception of your exhibition.  The exhibition seems to almost ask for it when one traces your education in language from the rapid, transactional, cash-based production of visual language, and then later you entered graduate school, post-graduate school, and then your 4-month residency, where the performance of working is often solitary, elongated, and introverted.  Why are you in love with this idea of airbrushing at the reception as much as I am? What is different?

Walter:  Airbrushing at the reception will be about reveling in the clash of syntax and semantics with the visitors, the performance will once again be compressed as I talk with exhibition visitors before and during my airbrushing, and I will try to figure out an emergent trajectory that will end up on 100% cotton.